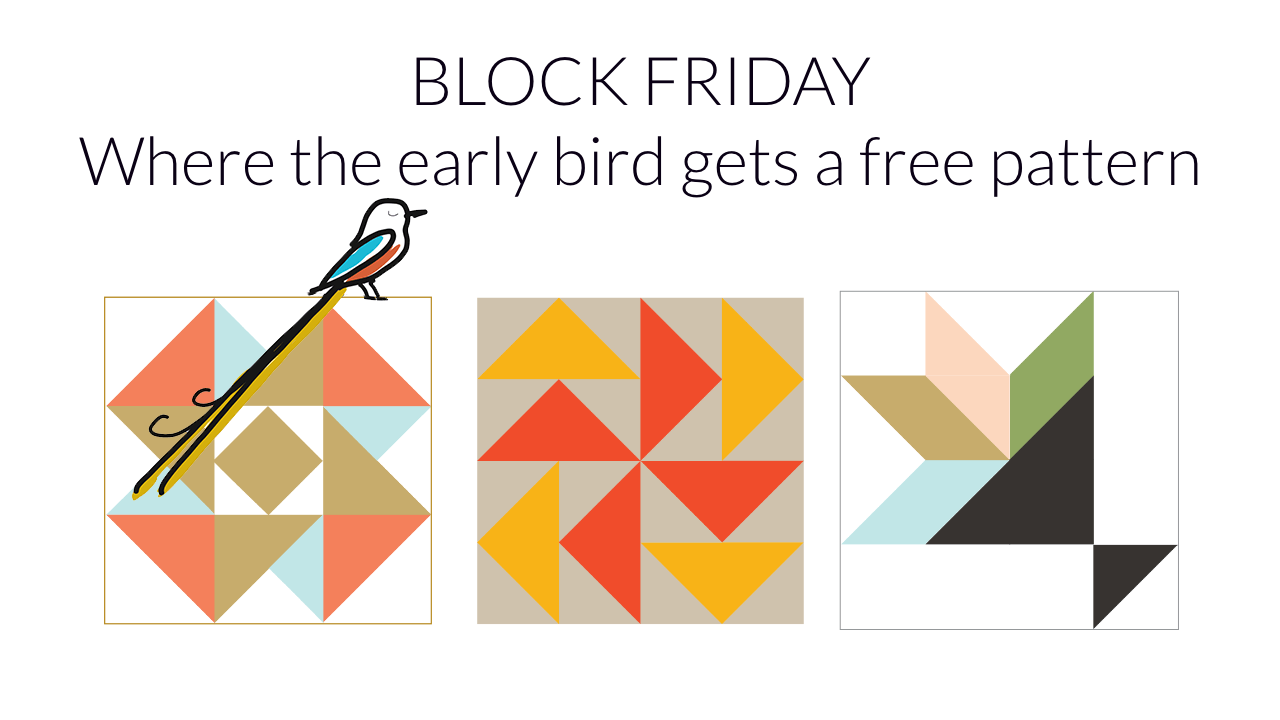 Since BLACK Friday is not my favorite American tradition, I decided to start my own little tradition here on the Scissortail Quilting Blog. And I’m calling it BLOCK FRIDAY.

My apologies to any true Black Friday fans.

Once. Let’s just say I’m more of a Cyber Monday kind of gal.

Block Friday is gonna happen (almost) every Friday here on the Scissortail Quilting website for at least the next year (maybe longer). Making blocks is hands down my favorite part of quilting, so this is very exciting to me. Making lots of different blocks was the number one way I improved my patchwork skills, and I believe it’s one of the best ways you can improve your skills, too.

A lot of fun is planned, and I hope to delight everyone with a few surprises along the way. (Think free patterns, contests, and prizes… maybe a charity event late next year if enough are interested.)

The fun revolves around my Quilt Block Library. If you haven’t checked it out yet, please head on over and visit for awhile.  (And if you like it, please tell your quilting friends about Scissortail Quilting!)  The blocks in the library are organized by categories in list form, but I hope to add a more visual listing of the library soon. (I’m still working the kinks out on that.) Currently, over 200 blocks are featured in the quilt block library. For now, each block is just categorized and illustrated. But all that is changing. My plan is to develop a pattern for each one of them, and this is where Block Friday comes in.

Just like Black Friday, Block Friday is where the early bird gets the deal.

But it’s the Holiday Season…

To give everyone time to prepare and to give us time to get the word out, we won’t officially start until January 5, 2018. But I want you to get a taste of what’s in store. So, I will make a new block pattern available each week between now and when the fun really begins. These “appetizer” patterns will stay free until January 5, and if you have time to make these blocks, they are fair game in the January contest.

So to get you started, here is your first Block Friday pattern (which is the full version of the pattern), the Air Castle Quilt Block:

Here is my version:

I hope you enjoy it. It’s one of my favorite little blocks to make.

Please tell your quilting friends about Block Friday. (You can use the Social Sharing buttons at the end of this post). And sign up for the email list to get notifications about the block patterns as they are released.