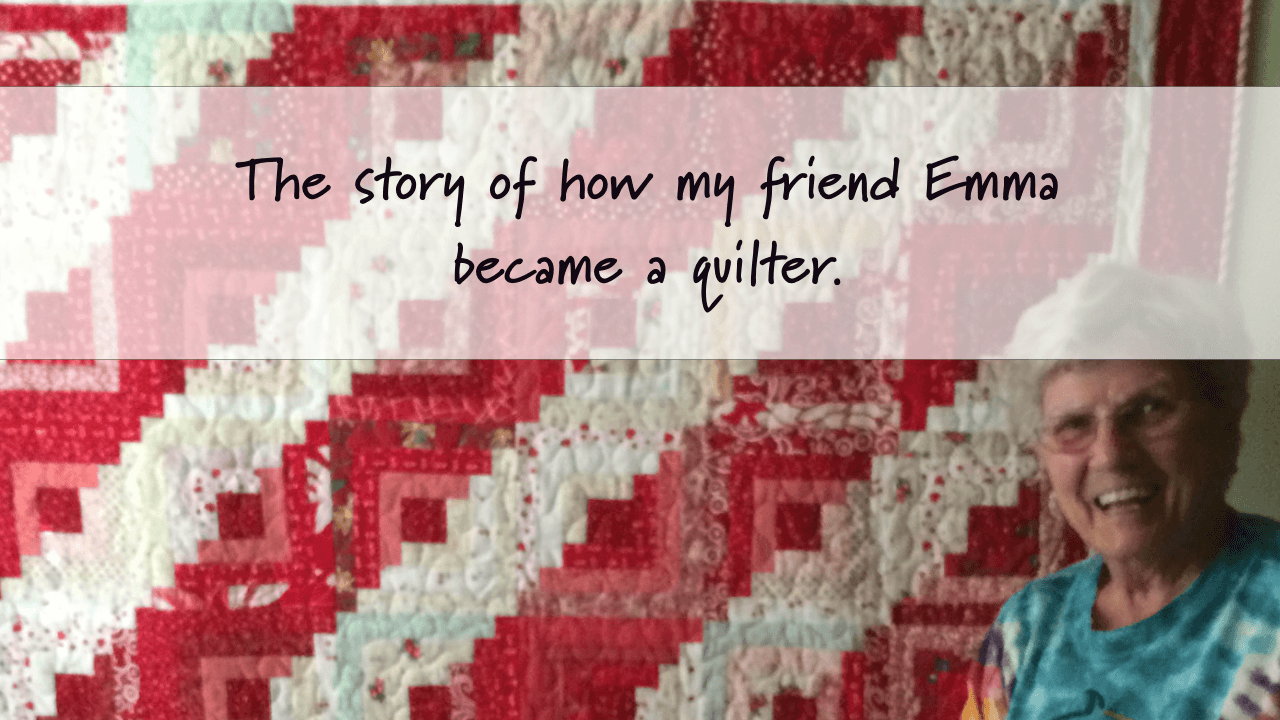 A quilter’s story: How my friend Emma overcame adversity and learned to quilt

If you’ve poked around my website a bit, you may have stumbled on a few references to my friend Emma. I talk about her quite a bit here and here. I went to her house last week, got her permission to tell her story and took a bunch of pictures of her quilts (or at least what is left of them…she’s given a bunch away.)

So, without any further delay, let me introduce you to the person who has influenced me the most on my own quilting journey.

This is my friend Emma:

As of the writing of this post she is 80+ years young. I could use a lot of words to describe her, but “feisty” and “fighter” are two of my favorites. Professionally, she worked as a nurse for many years, and she was still working as a private duty nurse when her story began. Despite being in her late fifties, she was agile and active.

The year was late 1998ish (I think…she told me 1999, but the math from how long her quilting group has been together works out to 1998). Her youngest son had recently graduated from high school and she and her husband had just become empty nesters. There was a new grandbaby, and it was a happy time.

She and her husband decided to take a small vacation to meet up with family in Colorado. It was early fall, and the colors were beginning to change. Emma and the other girls on the trip decided to go exploring on their own with the two grandbabies in tow. The van was crowded, so Emma had taken a place in the back with the babies, sans seat belt. As is typical of Fall in the mountains, the weather had provided a bit of a wintry mix, but it had cleared off for a great day of sight-seeing.

You can probably guess where this story is headed…

If you live in the mountains you’re well aware of this phenomenon, but there are often parts of a road that won’t get much sun because the mountains cast shadows. As their vehicle rounded a bend, they hit a patch of ice causing the van to spin out of control and go off the side of the mountain.

Amazingly, the two-year old escaped the ordeal with just a bloody nose. The seat belts kept the others in the vehicle safe, but Emma was not so lucky. Her back and pelvis were broken.

She was packed up in a stretcher and taken to Colorado Springs hospital where they did surgery to repair her injuries. Then she was transported back to St. Johns hospital in Tulsa where she remained for six weeks, unsure if she would ever walk again.

But slowly she did recover. Unable to return to work, she spent long, grueling hours in physical therapy,  Nine months later she was still in physical therapy trying to recover from her injuries when she was hit with a double whammy: She discovered a lump In her breast. Sure enough, it was malignant.  So they removed her breast and she started chemotherapy.

Now I’ve been blessed by the good LORD with very good health, but I did fall and crack my pelvis the week before my 49th birthday. The pain was hard enough to deal with, but what I wasn’t prepared for was the depression. Five weeks into the healing process, as I was still popping medicine just to function, I began to think “It will never get any better.”

And that is the pit that Emma found herself in: Still battling pain, and now losing her hair, constantly feeling sick and weak.

She realized one day that she was actually feeling better, but she was still bored and feeling sorry for herself. It was then that she thought, “I’ve got to get a grip. No one can fix this except me.”

She decided that to fight the boredom, she would pull out her sewing machine and try to make something. Over the course of her life, she had noticed that when she made something, it usually brought her joy. She has since told me several times, “God made us in His image, and he is the ultimate creator. I don’t care if it’s painting, sewing, whatever. When we create, we feel better.” She pulled that sewing machine out with no idea what she was going to make.

But as fate would have it, her sewing machine didn’t have a needle. So, she put her little turban on her head and drove herself to the sewing store to buy one.

When she got there, she was overwhelmed by all the beautiful quilts hanging in the shop. As she admired them, a woman approached her and asked, “Are you a quilter?”

“Oh no,” she replied. “I’m a nurse. I couldn’t do that.” They chatted for awhile and at the end of the conversation the woman said,

“Well if you feel up to it, would you like to go to Quilt guild with me tomorrow?”

And that was how it started. A woman in a shop reached out to a depressed and sick woman, and offered her a way out of the dark pit she had found herself in.

The next night, the woman picked her up, and Emma discovered the wonderful world of quilters. She believes God put that woman in her path at that particular time to specifically help her out of her darkness.

So Emma decided she would try to make a quilt. I asked her to tell me about that first quilt. She laughs and says, “Oh, there’s  a joke.”  For her first quilt, she had found a quilt in a quilting magazine that she liked. So she went down to the shop and asked her friend to get her the pattern and help her pick out the fabrics. Her friend quickly pointed out that the article in the magazine WAS the pattern!

Emma thought that was odd, as she was used to buying sewing patterns and had assumed she would trace and cut the pieces. They forged ahead with selecting the fabrics, and Emma soon finished it.

I asked her, “So, what block was that first pattern?”

“Oh I can’t remember right now, but I’ll show it to you in a minute.”

Later, we walked over to where she stores her quilts, “Here is what is left of my first quilt. I turned it into a cushion.”

I couldn’t hide my amazement. “ARE YOU KIDDING ME? Your first quilt was a BARGELLO?

“Well, no one told me that I shouldn’t have been able to make it, so I made it,” (And there is an entire lesson in that little comment, isn’t there?)

Another one of her early quilts was a quilt she made in a class, and this is the quilt pattern she uses when she teaches a quilting class: the classic snowball and nine-patch.

Obviously, she was a natural. She began teaching small classes, as she’s a big believer in “See. Do. Teach.” She soon formed a stitch group, and four of those original members still stitch with her to this day. “I thought I could teach them a few things, but actually they were teaching me.”

Quilting has taken Emma to many places. Quilting brought her the joy of creating, but more importantly, it brought lifelong friends. It brought her honor and awards. But mainly it was the pathway that helped her leave injuries, frailty, and weakness behind. She emerged a stronger and more compassionate woman.

It’s been over 20 years since Emma discovered quilting, and she has used it to touch many lives, including mine. I knew Emma’s story long before I became a quilter. It made an impression on me then because I saw the fight in her and her willingness to not allow adversity to reign over her life. But her story means even more to me now that I’m a quilter.  I know the truth in Emma’s philosophy about us being creators. It is when we create that we are most in Gods image, exercising our power to bring joy to the world around us.

And that is exactly what Emma has done with her quilting. She has spread an incredible amount of joy in the world. She has no idea how many quilts she has made or has helped to make. I think a conservative estimate would be at least 300.

These days Emma spends much of her time making charity quilts. Her sweet husband just beams when he tells others about his quilting wife because he knows she is such a treasure. These last few years, she faced another battle with cancer, re-learned to walk after a knee replacement, and fought off a nasty case of pneumonia. But she keeps on looking past her own troubles and finds ways to bless others.

So, now you know the story of how Emma became a quilter. I’m going to leave you with a gallery of a few of Emma’s quilts. I hope you find some inspiration here, and if you’re not yet a quilter, it’s not too late to become a one! Because it really is a great way to get off your pity pot!