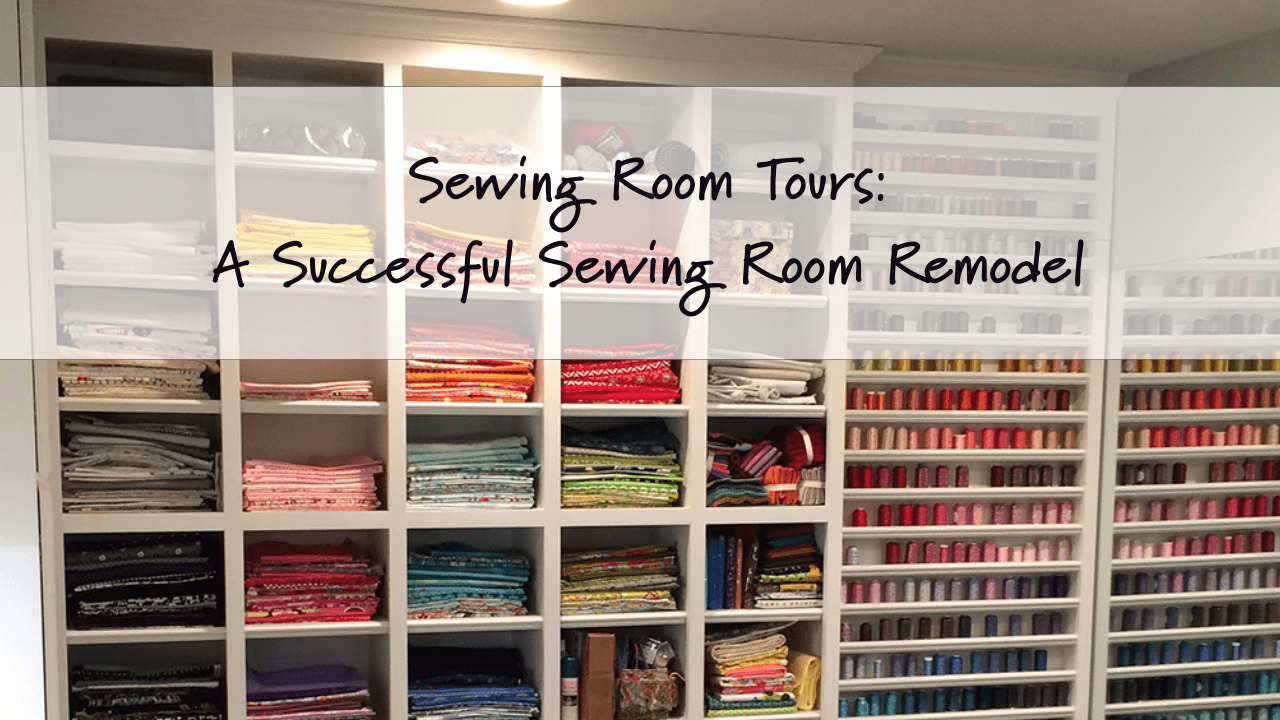 This week we have a special treat. We are peeking inside the sewing room of one of my favorite people — my dear friend and quilting buddy, Kim — who remodeled her studio in early 2017. My hope is that this will be the first of several posts spread out over the next 4 or 5 months in which we get to glimpse into some other quilting spaces!  I have an inkling we will see some interesting ways that people organize.

I was excited to travel to Kim’s house. It was a beautiful fall day, and the drive to her home, which is situated about 15-minutes outside of Tulsa, was saturated in the colors of autumn. Kim invited several of us over shortly after the remodel, so I had seen it before, but I hadn’t delved into the nooks and crannies to see how it really FUNCTIONED. This was going to be fun!

“Making do” vs Making an Investment.

For those of you who might just now be finding me, for the past few weeks, we’ve been talking about Sewing Room Organization. It was supposed to be a simple topic, but it stretched into five long posts. (Maybe it’s a simple topic and I just talk too much!)

From the start, I tried to emphasize that you don’t have to spend a lot of money, but you do need to put a little thought into how you set yourself up. As I took you through my space, zone by zone, you probably noticed that there were a lot of areas where I “made do.”

In the grand scheme of things, I’ve been pretty frugal and haven’t spent a huge wad of cash on my space. But all of us are at different phases of our lives, in different situations, and at different levels in our quilting journey. Needless to say, a large spectrum exists for ways that spaces can be organized and how intricately or minimally this is done. What matters is that the room works for the person using it.

When you see Kim’s space, you will realize instantly that she’s made a sizable investment into her space. But don’t let that discourage you. Kim waited a LONG time before she was able to create a space like this. And I so appreciate her willingness to open her home up to all of us, because I think she has some terrific ideas that almost anyone can glean from!

But first, meet my friend Kim.

Kim started quilting in 1991 and is a fantastic quilter (although she will tell you she doesn’t think it’s her strongest skill.)

She’s an avid gardener, a pet lover, a generous heart. She has a very discerning eye for color and scale. (If I need a decorating opinion, she’s one of the first people I will ask.)  She’s also an excellent knitter and a former knitting instructor. She loves machine embroidery.

But her real passion is needle-turned applique and decorative stitching.

She wouldn’t let me take any pictures of her during the visit, but here she is with the amazing and talented Sue Spargo. You can also find Kim on her Instagram Account.

She’s also a military wife. Since she married adventure, her life has been a series of moves, sometimes to foreign soil.

(Translation: her sewing room has been all over the world and has had to adapt. A lot.)

I asked Kim about that experience and about her early days of quilting. Her first sewing table is still in her space – a solid oak table made by her father-in-law. It went with her wherever she moved. The fact that the table survived all those moves, and is still in use today is a testament to how solid it is. (I’ll show it to you later.)

So, without any more delays, let’s take a look into Kim’s sewing space.

Before the Sewing Room Remodel

Before we get into the details, let’s see where she started. Here is the before picture.

Actually, this is the picture from before she moved in! When Kim and her husband first bought this home, this particular room was the “exercise” room, complete with a wall of mirrors. This space was located next to a large landing area upstairs which served as a media room. While the focus of this post is on her sewing room remodel, I should probably point out that the actual scope of the project included some updates to the Media Room as well.

After Kim moved in, she claimed the exercise space as her sewing room. This space had several advantages and a few disadvantages. The main advantage was that the room was located right next to an attic crawl space, so she was able to use that for overflow storage. (The door you see in the BEFORE photo above leads to the attic.)

But there were some disadvantages too. Here are some of the problems she needed to solve:

She spent a lot of time on Pinterest trying to find ideas on how to improve her space. She showed a few to her contractor/carpenter who sketched out a plan. And here are the results. (I’ve also identified where she has set up her sewing and cutting tables.)

When you walk into the room, the first thing you see is her cutting table. 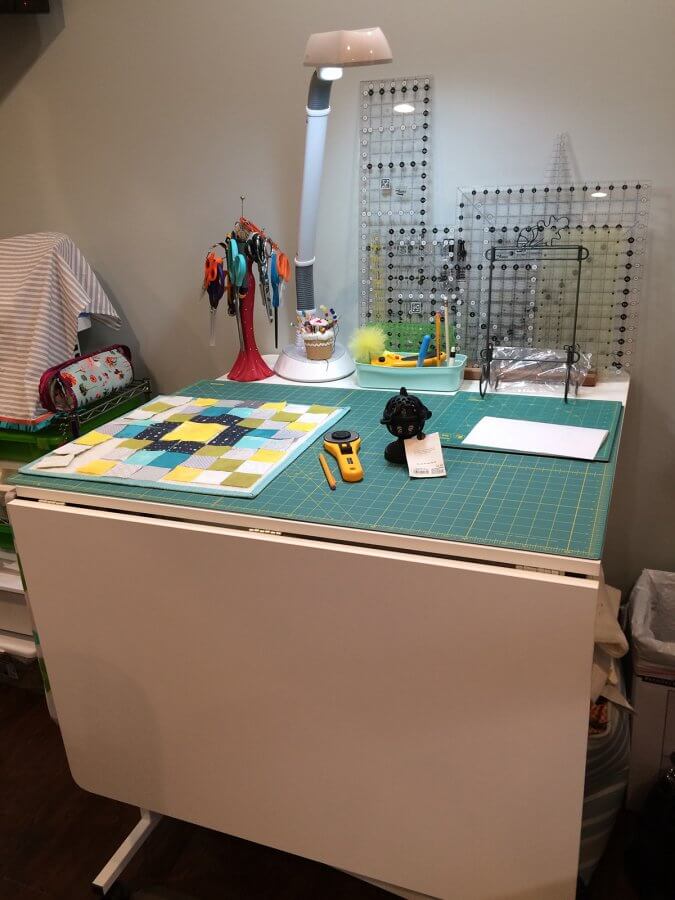 As you enter the room on the left, there is a long counter. A wool mat and her iron is situated on the countertop so that it sits directly across from her main sewing space. This forms a nice work triangle, with the three points being her main sewing machine, her cutting table and this pressing station. 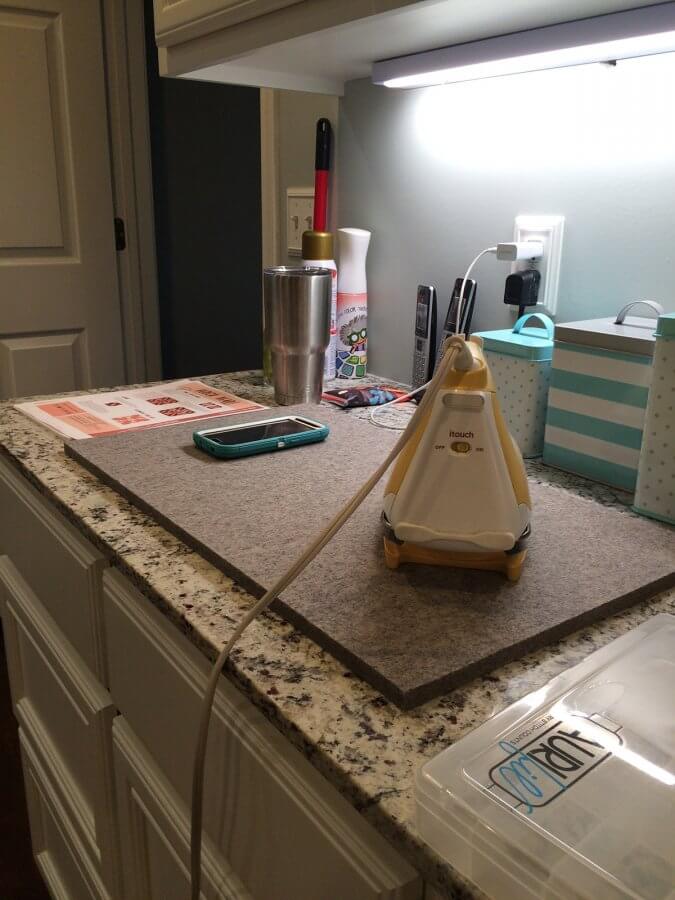 She keeps her full-size ironing board behind the door for when she needs to iron large sections. Further down the counter sits her computer and her digital cutter. 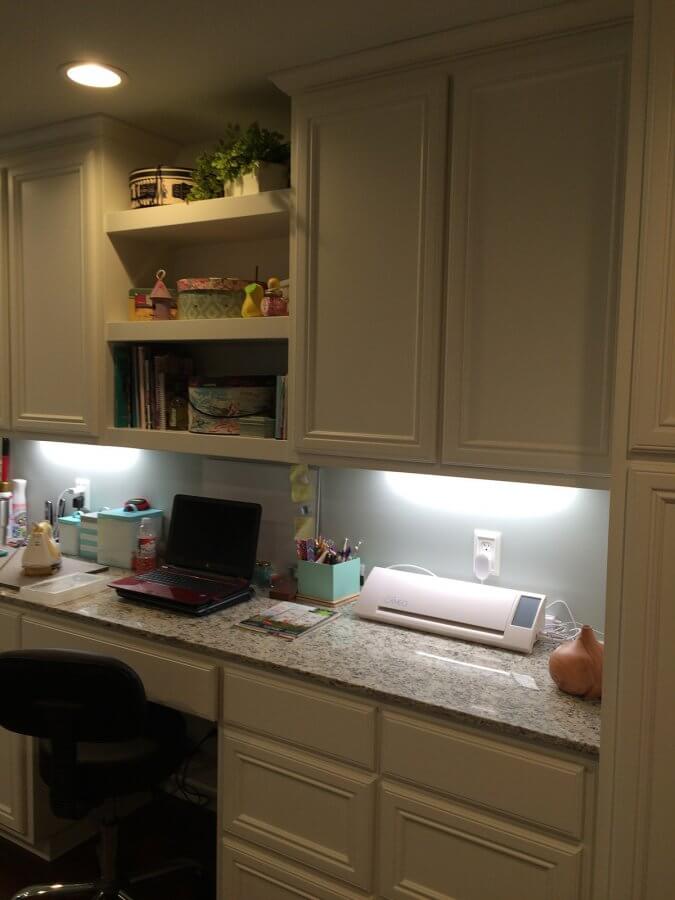 Her contractor had suggested that she “sink” the desk area in the middle of the counter, but Kim was smart enough to realize that it would be more functional to have a long uninterrupted work surface. She opted to keep the desk portion the same height and purchased an adjustable chair. Her contractor was thoughtful enough to put a foot rest below. 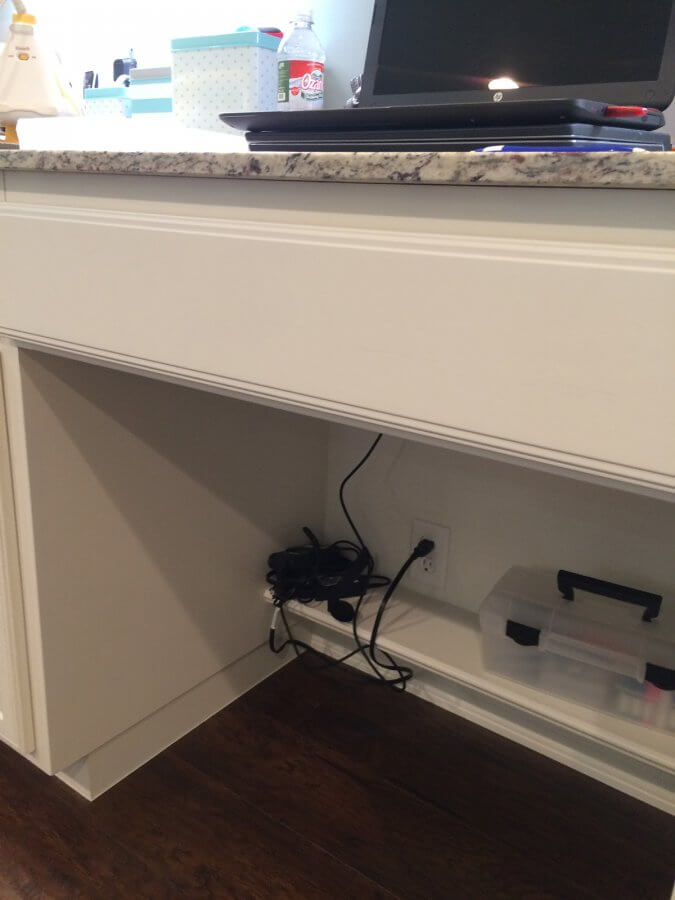 You can see that she has ample storage for notions, stabilizers, and works in progress. Toward the far wall, you see more custom-built cabinetry. 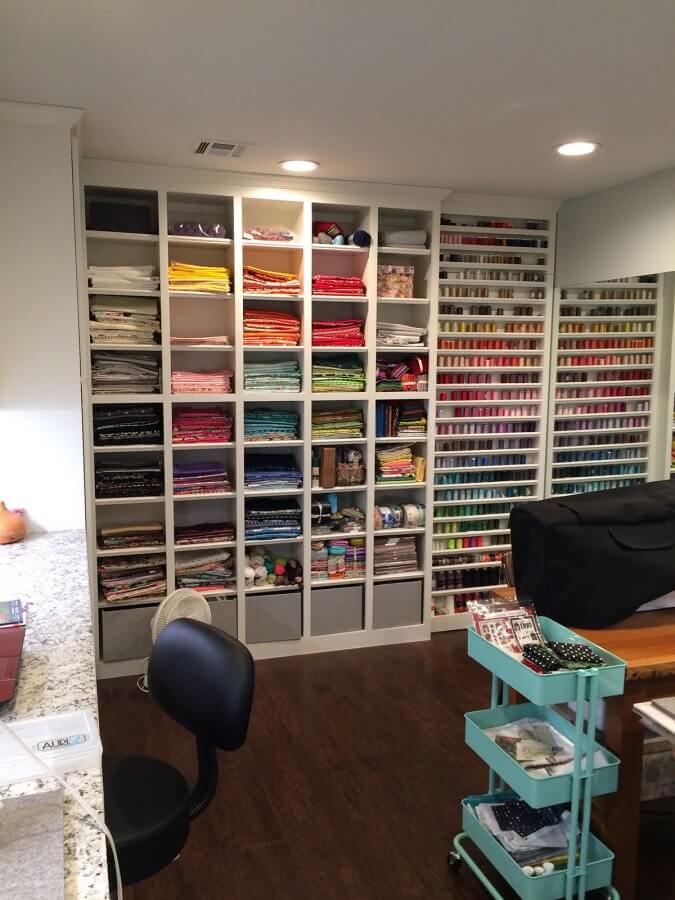 As you can see, he solved her fabric storage problem. In addition, with a stroke of genius, he figured out how to store her massive collection of embroidery thread, right across from where her embroidery machine sits. (Store it where you’ll use it!)

Here is the cool thing about the thread shelves: They actually sit inside a double door unit. The thread “door” opens to reveal the attic door behind it. 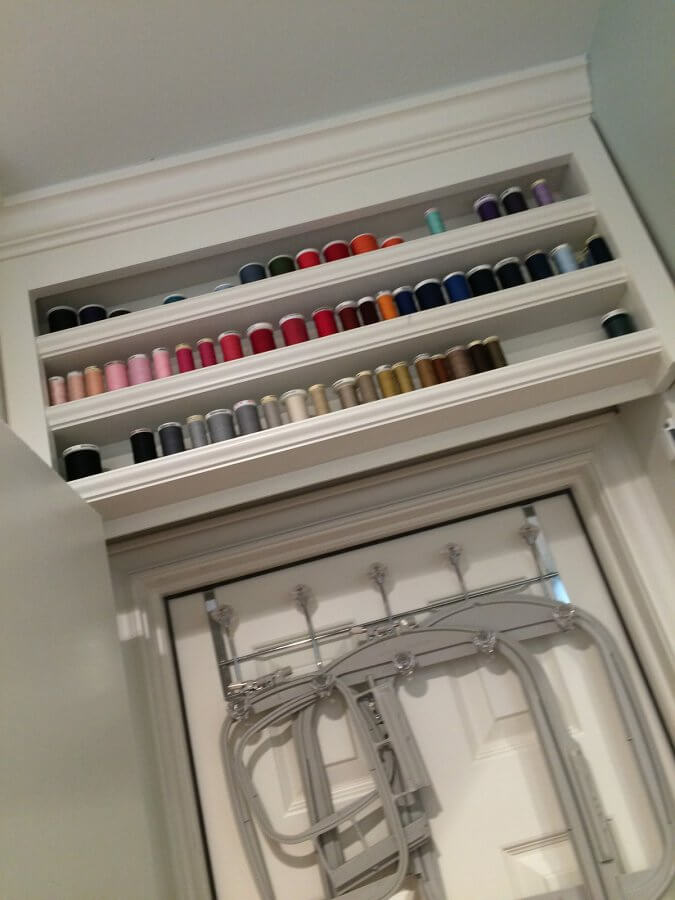 You can see that she takes advantage of the space between the doors to store her embroidery hoops. So clever!

Let’s look around the room a bit more, to see how her “sewing zones” are set up.

You may notice that Kim kept the mirrors. The main reason she did that is that her room does not have any exterior windows. You can see that one machine (on the right in the photo) is facing the mirrors. This is her main machine where she does most of her sewing and patchwork. The machine on the left (under the cover) is her embroidery machine. It sits on that nice heavy solid oak table I mentioned earlier. Also, note the little cart.  We will talk about that later.

Here are a few other nifty features. Kim’s husband installed a small TV in the corner for her. 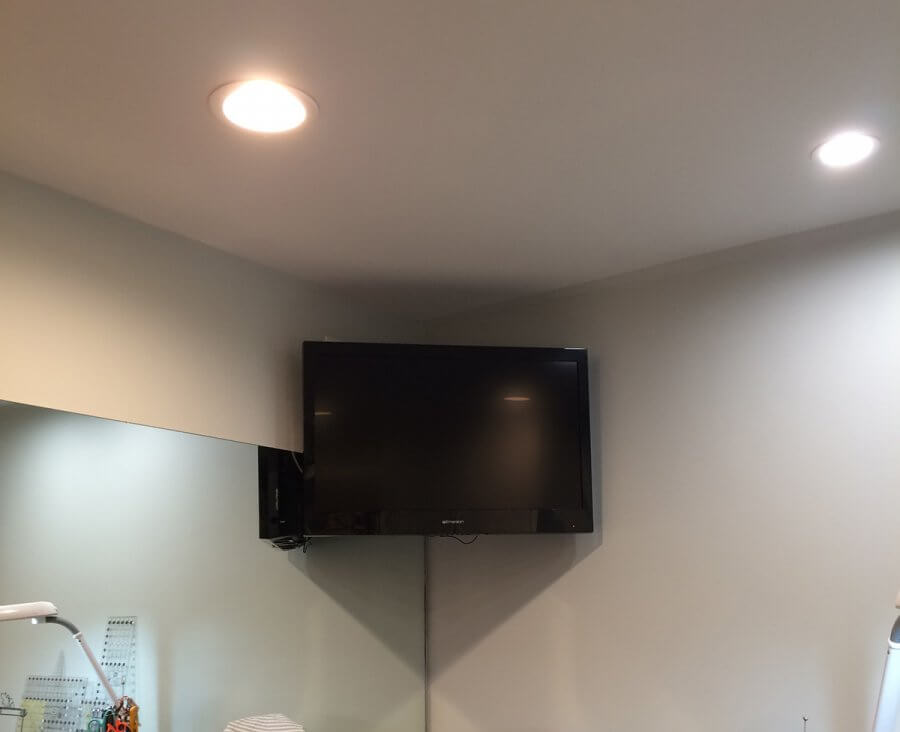 She’s happy it’s there, but what Kim really loves is her music. When she works, she usually has relaxing jazz music playing in the background (It was playing while I was there…so soothing! I could see why she enjoys it!) During the remodel she had wiring run and a special cubby holds the speaker unit. 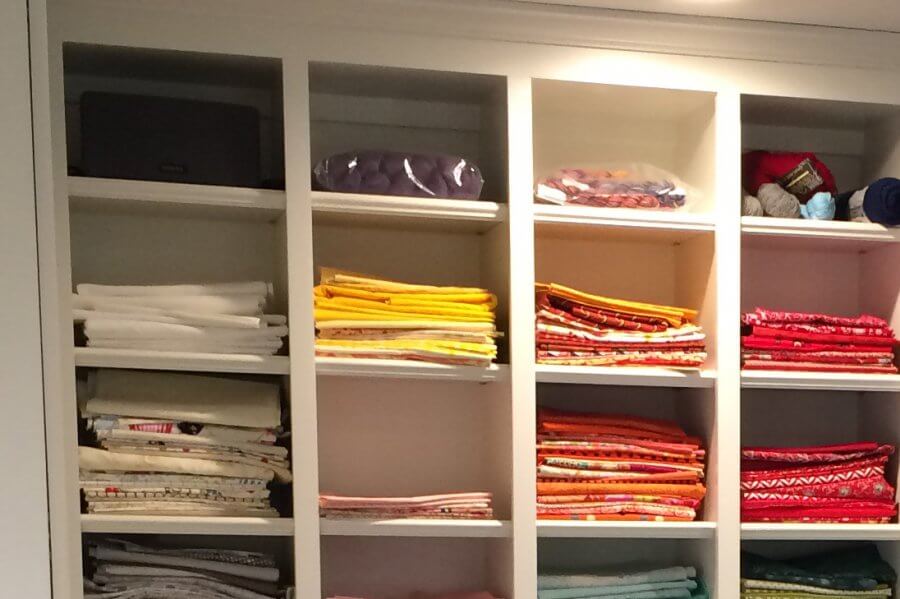 Now that Kim has been in her newly remodeled sewing room for over a year, I asked her how it was working out for her. She said, “This room functions very well for me because everything is in one place. Before the remodel I was all over the place.” Remember that she was having to go to her attic to find fabric. But she was also sometimes going downstairs to use a table when she needed more space.

I had observed that Kim had two rolling carts in her space – a gray cart and a teal cart. 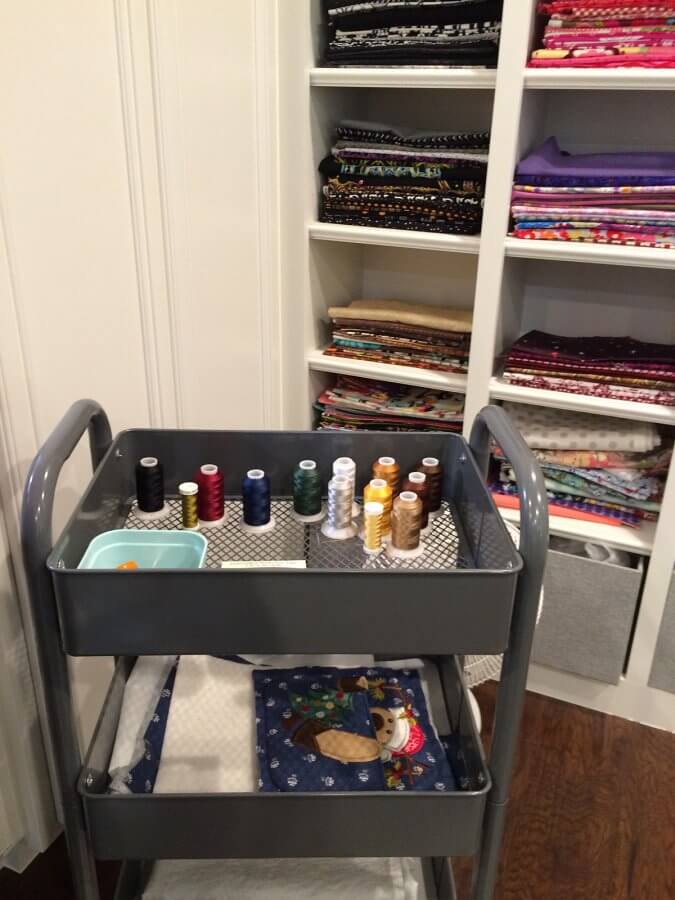 I asked her how these functioned in her workflow. The gray one sits beside her embroidery machine, and she uses it to hold the spools being used in current projects so they are right there beside the machine.

But her teal cart goes with her from zone to zone holding supplies from her current project. When she needs to cut, she pulls it to her cutting zone and arranges her fabrics (and later the cut pieces) in the cart. When she is at her sewing machine, she rolls it beside her again. 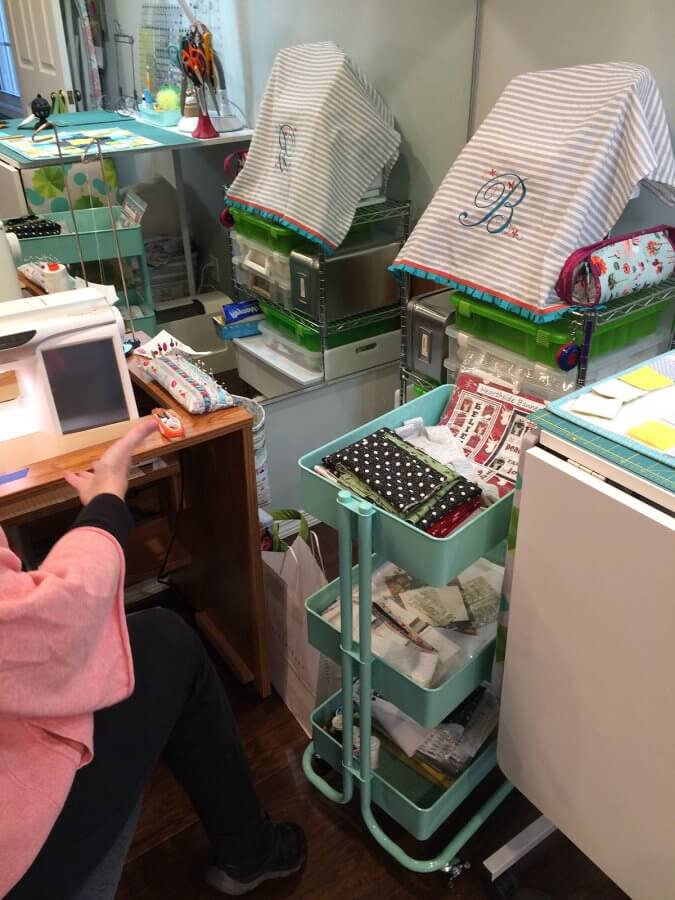 This little system saves her a huge amount of time. She told me, “Maria, I look at it like this: You know how it is when you’re piecing — how when you’re off just that little 1/16″ of an inch — how that multiplies across the quilt? And then you realize you’re off a whole inch because it all adds up? Well, all those little extra steps you take hopping back and forth across your sewing room are just like that. They add up and cost you precious time!”

She says her little carts are her “step savers.” If you’ve followed along in the series on Sewing Room Organization, one of the first suggestions I made was that you use a cart. As Kim’s system demonstrates, it truly is a versatile item for organizing.

Before we close, I thought I’d end with a few specific questions that I asked her – because I’m a nosey person (and because I knew you’d want to know, too!)

I hope you enjoyed this post about my friend’s sewing room remodeling project. A few other posts about other sewing spaces will come out in the coming months, so I hope you’ll come back to check them out. In the meantime, if you have any specific questions, comments, etc., please leave me a note in the comments section below or email me using the Contact Form on this website.

A change of place: my new quilting room