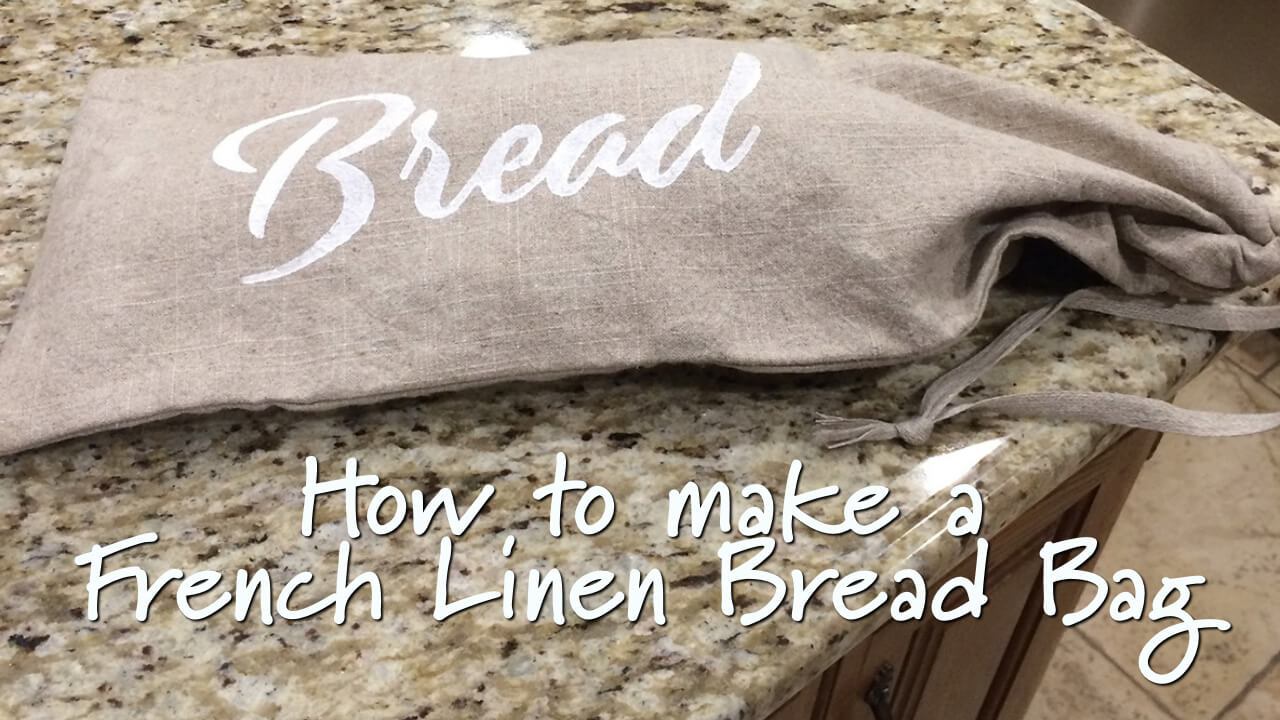 How to make a French Linen Bread Bag

Hello, friends. Today I’m sharing a tutorial for how to make a french linen bread bag. I whipped up a bunch of these a few weeks ago and have thoroughly enjoyed using the one I kept. Before I get into the tutorial, let me catch you up on what’s going on around here.

Admittedly I’ve been a little out of pocket the last few weeks. For starters, the wedding celebrations have begun. Family and friends came in a few weeks ago for the first wedding shower. It was such a lovely and joyful day. The darling couple was surrounded by loving family and my sweet friends from church truly showered them with blessings.

We had the big quilt reveal, too…Click here to see the post on the making of this quilt.

The other reason I’ve been a bit off the grid is that last weekend I attended a quilt retreat. This is a group that I meet with twice a year. I had signed up for the retreat way in advance, way before I knew how crazy this spring would be, but I was glad I went. It was just the break I needed. And I got a LOT accomplished.

(But I digress…I’ll tell you more about the retreat in my next post.)

The Back Story to my French Linen Bread Bags

So, why is a quilter making French Linen Bread Bags? Well, a lot of factors led me to this project…

Oddly enough, it really started about a year ago when, for health reasons, I decided to give up sugar and carbs, including all forms of bread. After some significant health improvements, I decided that I wasn’t buying bread for my family anymore either.

Yeah. That went over like a lead balloon! LOL

Disclaimer: this is a quilting blog and not a blog about diet and health. If you want to know more about my decision to give up carbs and bread, I can only point you to some places that led me to this conclusion, namely the websites of Dr. Peter Attia, DietDoctor.com, and Dr. Jason Fung’s IDM Program. I do not earn any money or commissions by referring you to them. I am just one health-seeking trying to show other health-seeking beggers where to find bread. (Pun intended.)

There was quite a bit of grumbling initially, and after about a month with no bread in the house, my oldest son decided that if I wasn’t going to buy bread, he would just make some. (He reasoned that it would be healthy if it was homemade. Give him some credit, at least he cares about the healthy part!)

…flour all over my kitchen

…the smell of freshly baked bread waking me up at midnight

…and the MASSIVE amounts of saran wrap disappearing from the kitchen.

I started to do a little research on earth-friendly ways to keep the bread from going stale and discovered that French bakers used to keep bread wrapped in linen because linen naturally attracts moisture.

Meanwhile, as we are in the middle of wedding plans, the issue of hostess gifts came up. My wedding coordinator-friend recommended we give artisan bread.

(My first thought: Seriously? Bread?! I simply cannot get away from it!)

But in the end, it sounded like a cool idea, especially when future daughter and I stumbled upon some super cute cheese plates to go with.

In an effort to pretty up the packaging and experiment with my bread bag research, I decided to try my hand at making some French Linen Bread Bags as wrapping for the gifts.

The tutorial that follows for how to make a french linen bread bag is the culmination of all of that.

Now, the bread bag itself is very basic. It’s a simple and a perfect project for a beginner. I did decide to make the bags with French seams, to give them a more polished look. If you’re a beginner, don’t let “French Seams” scare you off. They are not difficult. They just require an extra step. And. in my opinion, they are totally worth the effort.

I whipped up 10 of them in a couple of hours.

For my “Bread” label, I played around with quite a bit of typography in Adobe Illustrator before I found the look I was going for. I wanted a nice chunky script – something that evoked a farmhouse feel without being too rustic (or illegible…one of my biggest pet peeves!)

Then I transferred the typographic design to my Brother Scan N Cut, created a stencil and painted them up the next evening. (I explain this in further detail below.)

The day before the shower, we bought the artisan bread (No, I did not get son #1 to bake it!), wrapped the bread in the bags, then tied them to the cheese plates with white tulle ribbon. They were a big hit, BTW, as evidenced by this text I received from one of the hostesses a few hours after the shower:

So, if you want to try them out for yourself, here are the instructions for how to make a french linen bread bag:

Supplies you will need:

If you want to stencil paint the “Bread” label:

I chose to stencil the word “Bread” on the outside of my bread bag. Of course, applique is an option, too.

For the next few weeks, I am including a free download on this post for the file I used to make my stencil, and it works for stenciling or applique. Download the file by clicking the highlighted text below:

If you choose to stencil…

If you own a Brother Scan N Cut machine, you can scan in the download to create a cut file, or if you have the wireless interface on your machine you can upload the included SVG file to the Brother Canvas workspace, and send the design to your digital cutter that way.

A digital cutter is a great tool if you do a lot of applique or paper crafts.

The link below is an affiliate link, which means that if you click the link and choose to make a purchase, I will earn a commission. This commission comes at no additional cost to you. Please know that I only link to items which I personally use and feel that I can confidently endorse. Your support by using these links is greatly appreciated.

If you think you might like to try using a digital cutter, I highly recommend the Brother line.

I loaded my mat with a sheet of vinyl stencil plastic, set the blade to 4 and the pressure to 5. One caveat about the stencil: it can’t make the little cutout inside the “e.” I’ll tell you later how I got around this.

So, after your stencil is cut, find the vertical center of your bag by pressing your finished bag in half lengthwise. (I only centered the design and chose to not center it since I wanted the wording to appear more toward the end of the bag.

Place the bag on a hard surface. Use painter’s tape to hold the stencil in place.

Since the center of the “e” cannot be cut into the stencil, I cut a piece of painters tape to match the middle of the “e” and taped it in place directly on the fabric after the stencil was in place.

Load up your brush with the fabric paint and dab off the excess. If you are using a stencil brush, hold it like a pencil with the bristles flat on the surface, making small circular motions. Kthe brush rather straight, to prevent the paint from bleeding under the stencil. Try not to go too heavy with the paint, as you don’t want it to bleed through the fabric either.

Remove the stencil and allow to dry for 24 hours. Then, using a pressing cloth and very hot iron, heat set the paint as directed by the paint manufacturer.

Bread still doesn’t work it’s way into my diet very often, but when it does, I make sure it’s worth every carb and it’s slathered with butter. But whether you’re a bread-eater or not, I hope you have great success with this little tutorial. Feel free to reach out to me via my contact page if you have any questions.

A Quilt Binding Primer (Part 5): How to Hand-sew Binding on a quilt