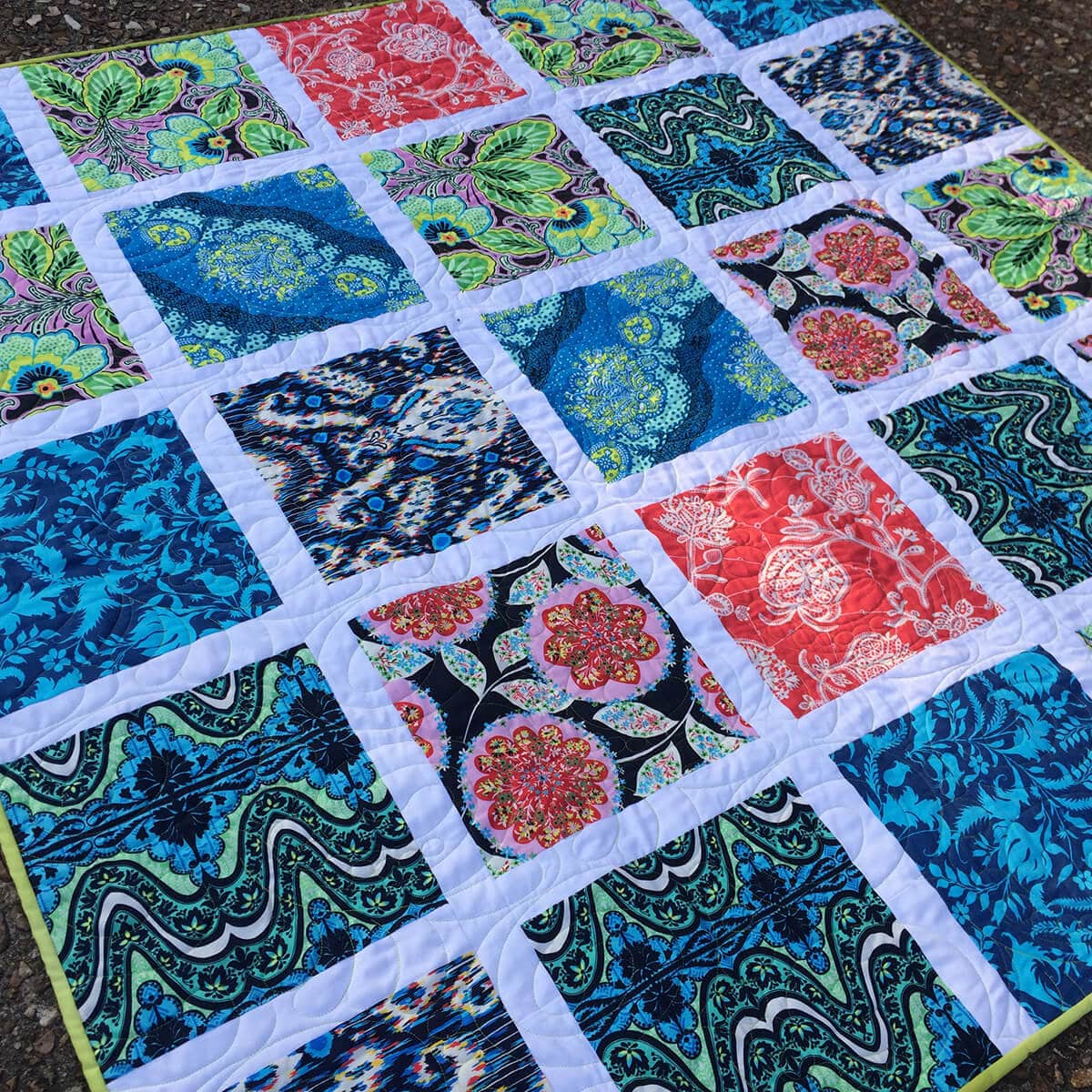 Hello again! I haven’t posted to this blog in several weeks, so I am overdue to “catch up” with everyone. This post will highlight two quilts for friends of mine with cancer that I’ve had the honor to work on these past few weeks. Before I get too far down in the weeds with this post, I should say that this has been a hard post to write. Mostly because some of this is personal.  But also because I’m always afraid that when we talk about something we have done for someone, it may come off as boastful.  So, I guess what I want to make perfectly clear is that this post isn’t about me. But rather it’s about what quilts can do for people who are hurting.

Let’s just put it out there: Cancer sucks. It’s just a horrible disease, and often the treatment is even worse. If anyone deserves to be wrapped up in a big quilt hug, it’s someone who is going through this struggle.

For the biggest part of my life, I have somehow avoided being affected much by cancer. I knew it was an awful disease, but I’d never watched someone that I was very close to truly suffer from it.  There was the time when one of my best friends had breast cancer when we were in our thirties. But she was young, they caught it early, and she made a great recovery. It was rough, but we didn’t have to deal with that ugly side of cancer. The side that slowly saps every ounce of life you have and then rips you away from your family. Looking back, I can say that I pretty much had a Pollyanna view of cancer – it was just another disease where people got sick but there were some great treatments out there and wasn’t modern medicine amazing? (Cue to one of those Cancer treatment hospital commercials where everyone is beating cancer.)

All that changed in 2012 when my father-in-law found out that his “cancer free” verdict wasn’t exactly true. Seven years earlier, doctors had found prostate cancer, and we had thought the fight had been an easy one. He had his prostate removed, had a few rounds of radiation and life went on. Except apparently, one little cell sneaked out into his system, and in 2012 while visiting us for our oldest son’s graduation, he began to feel the effects. By June we discovered that it was virtually everywhere in his body, but due to some experimental drug treatments, he made a good rebound for 18 months before cancer finally won.

His death wrenched my heart in two, and our entire family has a deep hole from the loss. But if there is a blessing from the ordeal, it’s that the experience left me with a much more empathetic soul to those who are touched by cancer.

The past four months I have felt surrounded by it. It has seemed that every time I turn around I hear another cancer story. Right before last Christmas, my quilting friend Rita called to say that cancer was pretty much everywhere in her bones, too. Then I found out my next door neighbor had just a few months to live. And then, if that wasn’t enough, my good friend, Shera, was told she would need a miracle. All of that hit me pretty hard. Maybe it’s because I’m on the other side of middle age. Maybe I feel death crouching at my doorstep.

My first instinct is always to feel helpless. And I never know what to say.  As Rita began to tell me about her condition, little prayers were going up. “God, please help me know what to say. I’m so awful at this.”

But when Rita called, she wanted my help, and the helpless feeling melted away. Her treatments were keeping cancer at bay, but she just didn’t have the energy to make a quilt that she had promised a family member.  No problem, I told her. We will get it done. We met, she described what she wanted, and I took all her beautiful purple and gold fabrics home with me. Here is what happened:

I cut lots and lots of strips and sewed them together, then cut them again into rows of squares. Below, you can see where we formed the cross, and then started figuring out how to arrange the gradient colors around it.

But here is the true confession: Rita’s quilt isn’t exactly my kind of quilt. Sure, I loved some of the fabrics, but let’s face it…it’s mostly made up of squares, and I usually want a little more of a piecing challenge when I make a quilt.  But it was so worth making this quilt even though I was a little bored in the making. Her smile brought so much life back to her face. She was very happy about it, and I can’t wait to see what it looks like when she gets it back from the quilter.

Shortly after I started on Rita’s quilt, I ran into my longtime friend, Shera. Shera and I were in the same Bible study group for a LONG time and I feel a special closeness to her. I’ve watched her children grow up, I watched as she cared for her father and then her brother, and all I can say is that she sets the most beautiful example of serving and loving her family. Back in December she found a mass and had it removed, but when I ran into her she had just returned from seeing some doctors who had given her some bad news. Her words, “I need a miracle.”

Once again that helpless feeling. I came home that day and told my husband that all other projects were on hold because I needed to make Shera a quilt. And I knew just the fabrics. Shera’s father had immigrated over to this country from India many years ago. It’s funny how things come full circle, but three years ago I had bought a bundle of Amy Butler fabrics. Shortly after I purchased them I watched an interview of Amy where she described her creative process while designing the fabrics. She had traveled to India and had been heavily influence from that trip by the bright colors and rich Eastern motifs.  I instantly thought of Shera and her family, as they are the only I’m family that I am fairly close to with an East Indian heritage. Amazingly, the fabrics were still in my stash. Waiting for Shera.

So, I needed to make this quilt pretty quickly. And since I work full time (I only dream that quilting and this blog were all I had to do!) I knew I needed to make something fast. And that sort of worked out to my advantage, since the large prints in Amy Butler’s line were best showcased in big blocks. So here’s what I whipped up:

When Miss Emma found out what I was up to, she said, (Because she knows how crazy busy I am) “I can help you out with the binding when you get it back from the quilter.” And she did. (Thanks Emma!)

Here are a few more shots of the completed quilt: 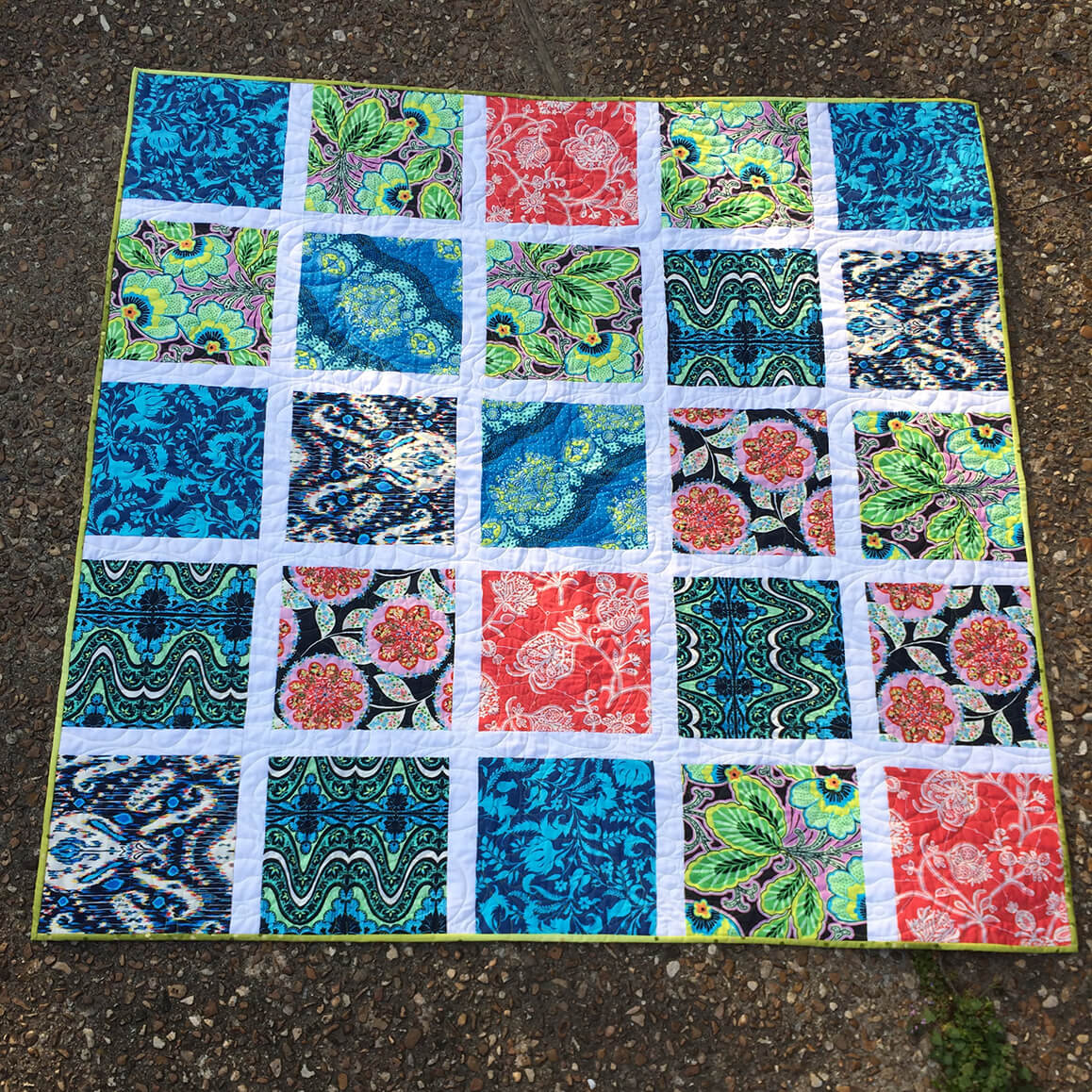 For the back, I chose an Ombre dot fabric (and let me say, I am totally in love with those Ombres! I’m thinking I need some more…) I split it down the middle and inserted some blocks of fabric that I had leftover from making the quilt. Here’s a picture: 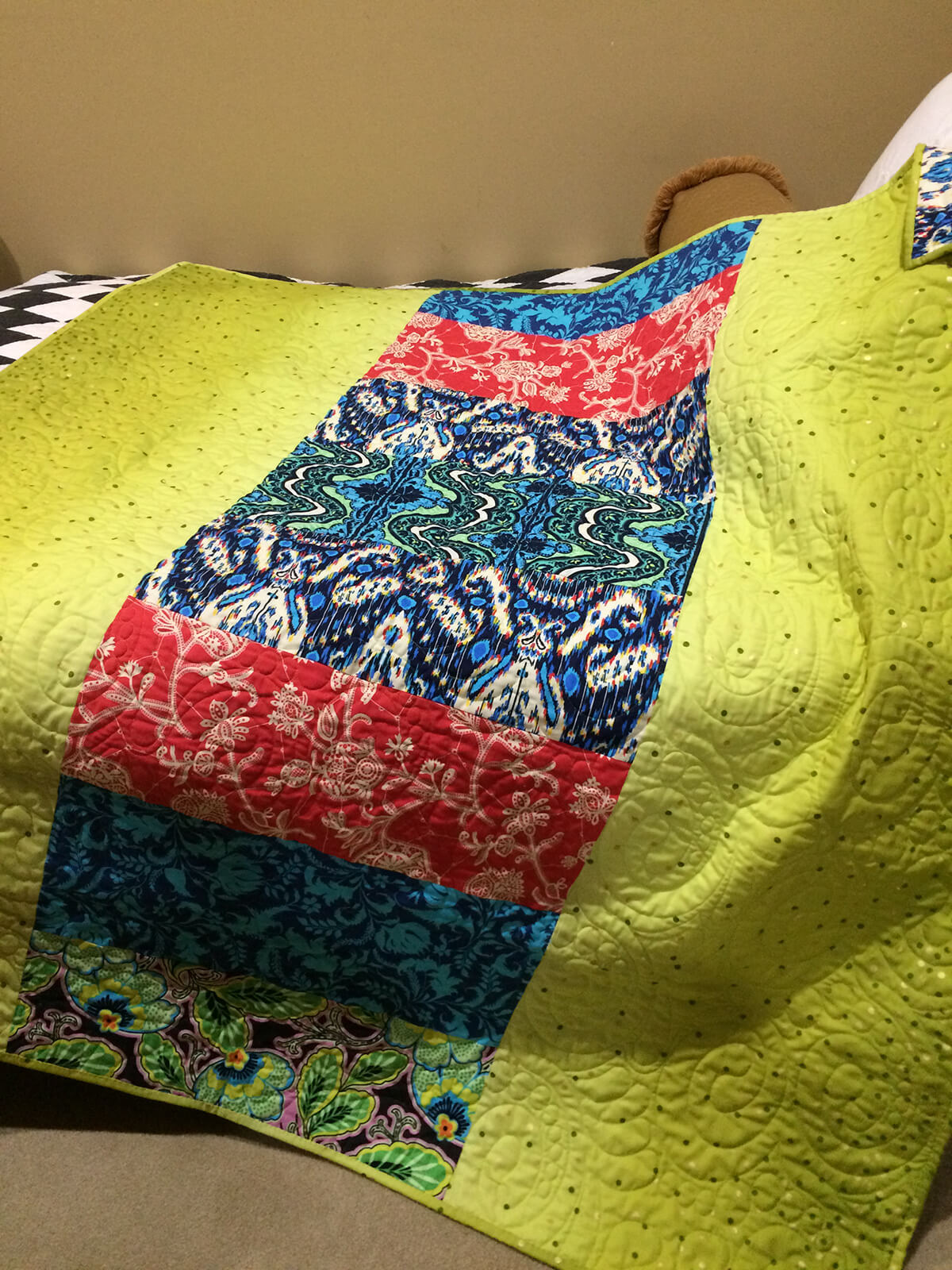 I think my friend Rochelle did an excellent job on the quilting!

But the best shot of all is this one. Shera is BEAMING.

It was so nice to see the smile on Shera’s face. She has a difficult road ahead of her, and so does Rita. But hopefully, these quilts will bring them some comfort.

That’s a what a quilt can do. It doesn’t just warm the body, it warms the soul.

With every stitch, I’ve prayed for their miracles. But it occurred to me that there is already a bit of a miracle in every quilt.

Somehow in all those thousands of stitches, love lives, and even cancer can’t stop it.

So, quilt your heart out, people, cause love is worth a thousand stitches!